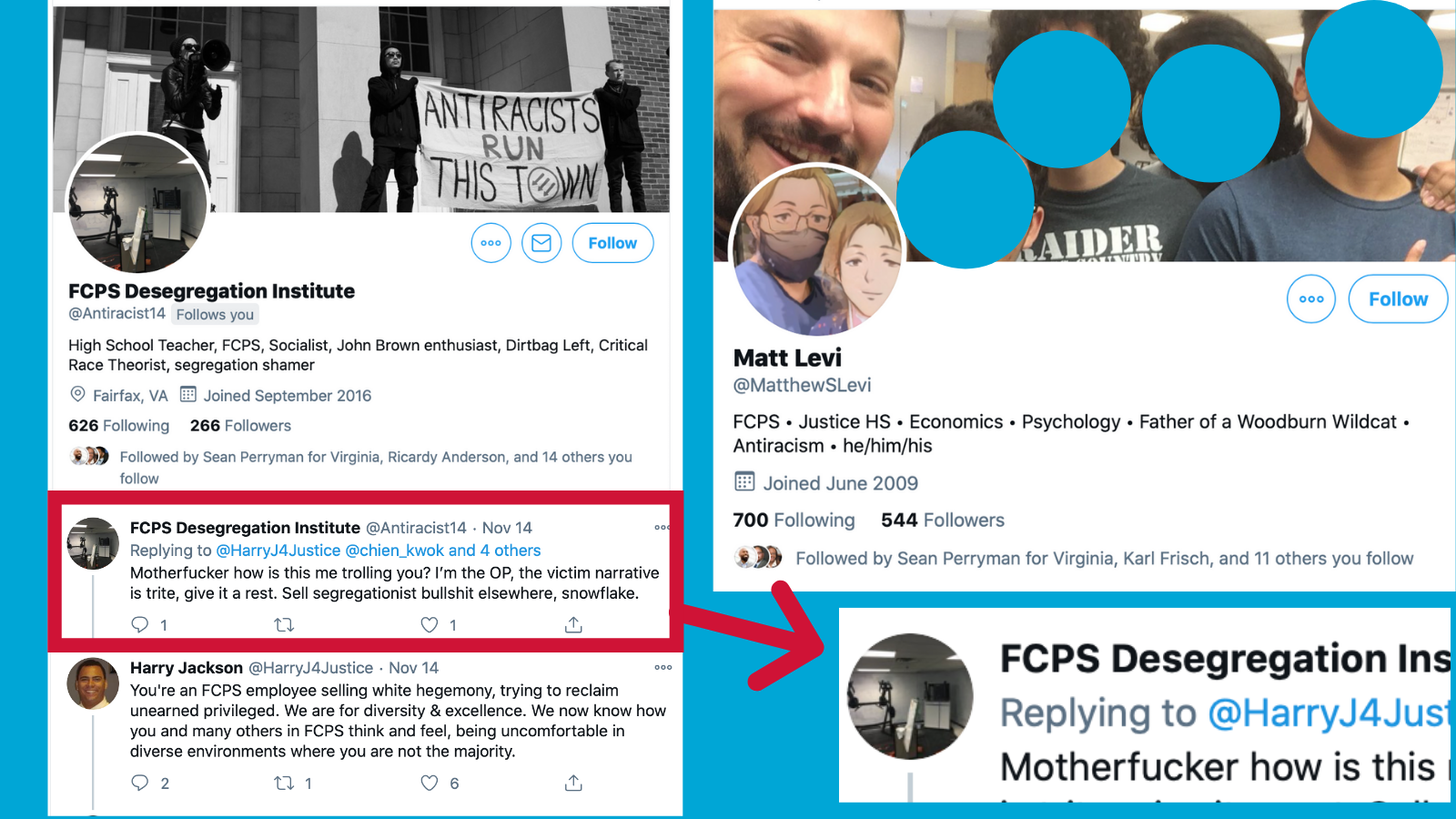 FAIRFAX COUNTY, Va — In a series of attacks in mid-October, a troll using the anonymous account @AntiRacist14 lashed out at Harry Jackson, the Black father of two local students. When Jackson called him out, the troll responded: “Motherfucker how is this me trolling you? I’m the OP [original poster], the victim narrative is trite, give it a rest. Sell segregationist bullshit elsewhere, snowflake.”

What is shocking here is that the attack didn’t come from some random troll, and it doesn’t fit the narrative that civil rights activists challenge white racist bigots hurling insults at minorities. The person behind the account is a white self-described “Dirtbag Left” Fairfax County Public Schools teacher, pressing the “anti-racist” politics that have become politically correct — and divisive — today from California to Virginia.

In real life, @AntiRacist14 is Matt Levi, a social studies teacher at (the ironically named) Justice High School on Peace Valley Lane in Falls Church, Va., according to people familiar with the situation. A Fairfax County Public Schools spokeswoman didn’t yet return a request for comment. Neither Jackson nor I have received a response yet to a complaint filed this morning with Justice High School Principal Maria Eck, Fairfax County Public Schools Superintendent Scott Brabrand and the 12 members of the Fairfax County School Board, including board chair Ricardy Anderson, who follows Levi’s true-name account and fake @AntiRacist14 account.

The attacks on parents by a teacher-activist underscore a deeper crisis in public school education today as the ideology of “critical race theory” and the dogma of “anti-racism” incite and embolden activist educators and bureaucrats to become more and more aggressive in their zealotry. For example, San Diego Unified School District recently demanded teachers take “anti-racism” training, deeming white teachers as “racist” and forcing pledges of virtue signaling, such as the admission, “I am a racist.”

The situation is further disturbing considering half of the Fairfax County School Board members follow this anonymous account. The board members who follow the account include: board chair Ricardy Anderson and board members Karen Keys-Gamarra, Rachna Sizemore Heizer, Karl Frisch, Melanie Meren, Stella Pekarsky.

The father, Jackson, fell into Levi’s crosshairs because he is one of thousands of parents, students, alumni, community members and business leaders opposed to the half-baked plan by Superintendent Brabrand to replace the race-blind, merit-based admissions test to Thomas Jefferson High School for Science and Technology with a lottery, in a very flawed scheme to increase the number of Black and Hispanic students at TJ. The School Board is meeting this afternoon in a “work session” to overhaul admissions to the school. The session is live at this link.

In November, using his fake @AntiRacist14 account, Levi called Jackson, “just another segregationist.” Despite parents flagging the account numerous times to @FCPSNews, nothing has been done to shut the teacher-troll down.

Jackson’s son is a freshman in the TJ Class of 2024, and Jackson knows a thing or two about segregation and breaking racial barriers. Jackson’s father lived through Jim Crow racial segregation, and Jackson was the first Black student selected to go to U.S. Naval Academy from Lancaster County, Pa., and he a member of the U.S. men’s national bobsled team.

So do I. As a Muslim single mother from India, I have broken a few glass ceilings, among the first Muslim women working at the Wall Street Journal when I started there in 1988, before leaving in 2003, after I had my son, as a single mother. Still, Fairfax County board member Keys-Gamarra “liked” a tweet, now pinned to his account at which Levi used @AntiRacist14 to report me to @Twitter for my advocacy against the lottery, alleging: “White Supremacy has no business on Twitter.”

Other followers include the controversial TJ Alumni Action Group, which has been pushing a lottery at the school and attacking TJ parents, and its members, who oppose the lottery. Its members who follow the teacher-troll include Rachel Lei @Asian4Diversity, Jorge Torrico at @CyclingProgress and Vanessa Hall.

Asra Q. Nomani is a former Wall Street Journal reporter who has taught journalism at Georgetown University. She can be reached at asra@asranomani or via Twitter @AsraNomani through direct message. This column is republished with permission from her Substack account.