Another Use and Abuse of Statistics… 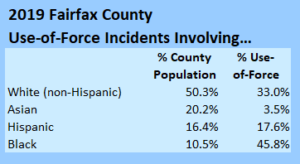 The Fairfax County Police Department publishes a statistical report every year on the police use of force in the county. There were 594 use-of-force incidents reported in 2019, up from 510 the previous year. The publication provides data with minimal commentary.

This is the headline from the Reston Now article summarizing the report: “Fairfax County Police Disproportionately Use Force on Black Individuals.” The headline was backed up by this paragraph:

By placing the data in the context of the national uproar over the George Floyd killing and calls for police reform, as the story did, Reston Now feeds the standard media Oppression Narrative. But the story left a lot out, which seems to be the usual operating procedure. Cherry pick the facts that support the media narrative, and omit anything that might call it into question.

Clearly, Fairfax police do use force on African Americans out of proportion to their numbers in the population, as seen in the table atop this post. That leaves unanswered the question of whether African-Americans are more likely than other racial/ethnic groups to be involved in crimes, and especially if they are more likely to resist arrest, thus putting themselves in a position where force is warranted.

Unfortunately, the Fairfax report does not provide the data that allows us to answer those questions.

Another perspective lacking from the Reston Now article is the remarkably low use of force against Asians. Residents of Asian background comprise 20.2% of the county’s population but only 3.5% of use-of-force incidents. Why is that not worthy of notice? After all, Asians are described by many commentators as “people of color.” Why would police be so much less likely to use force against Asians than other people of color?

Hispanics, by the way, comprise 16.4% of the county population and 17.6% of community members in use-of-force incidents. Police use force against Hispanics in rough proportion to their numbers. Not only are Hispanics “people of color,” they are said to be brown people of color! Is this not worthy of note?

While police deployed force in 594 incidents (involving 688 community members), community members engaged in 231 assaults on the police, according to the Fairfax police data. Unfortunately, the report presented no data illuminating how often the police used force in response to assaults initiated by the populace. Examining the relations between assaults on police and police use of force would seem to be a logical thing to do. Likewise, it would be logical to ask if African Americans, after years of relentless rhetoric about them being victims of police brutality, were more likely than others to assault police officers.

The Fairfax data do not allow us to draw any firm conclusions.

Note on the statistics quoted here: The Fairfax County report broke down the county’s “demographics” by race, not ethnicity. In other words, it did not break out Hispanics as a separate group. However, when reporting the demographics of individuals involved in use-of-force incidents, the FCPD did break out Hispanics separately. To compare apples with apples, I used 2019 Census Bureau data. For “white,” I used the bureau’s “White alone, not Hispanic or Latino” category. Accordingly, my percentages differ from those in the report. As for Reston Now, frankly, I am at a loss to explain it derived some of its numbers.

This entry was posted in Crime , corrections and law enforcement, Media, Race and race relations, Uncategorized. Bookmark the permalink.

6 responses to “Another Use and Abuse of Statistics…”