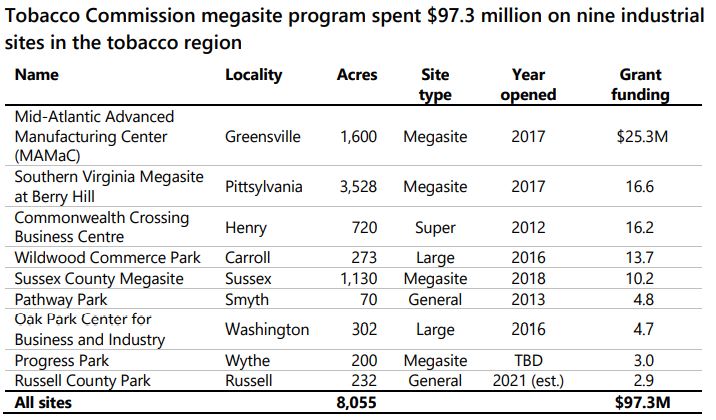 The megasites could accommodate 4,400 workers after 10 years and 22,000 at full build-out. Two sites are not yet considered business ready.

JLARC identified four other projects for which the megasites were in the running but did not make the final cut, including two automobile makers. “In each case, workforce availability concerns and larger incentives offered by competing states played a major role in business choosing other locations.” Writes JLARC:

The tobacco region megasites have significant limitations when compared with
megasites around the country that will affect their ability to attract businesses. The Tobacco Commission megasites have much more limited workforce access (i.e., population aged 18-64), particularly workers residing within 30 miles of the park. … Expanding to 60 miles improves the size of the workforce significantly, but it still lags behind the national benchmark. Educational attainment levels of county residents in the tobacco region are also significantly lower than average megasites around the country.

Many of these limitations were pointed out in a study by a consultant in the early 2000s to help the Tobacco Commission identify a megasite to attract a foreign automobile manufacturer. The study examined 19 sites and found none were ideal. Even the best site (Sussex) still had substantial limitations. …

Bacon’s bottom line: The creation of a tobacco commission endowed with hundreds of millions of dollars from the tobacco settlement created a once-in-a-generation opportunity to reinvent the economies of Southside and Southwest Virginia. The industrial megasite program represented one of the commission’s biggest investments on the logic that you’ve got to pay to play. It was a big bet, and has yet to pay off.

Maybe someone will get lucky and that story-line will change. The projects were conceived before Stephen Moret became CEO of the Virginia Economic Development Authority. One can hope that he can salvage the $90 million investment through VEDP’s new job-training and marketing initiatives.