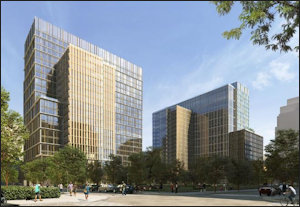 Amazon.com, Inc., is pushing for an intelligence-sharing alliance with law enforcement and emergency-management agencies around its Arlington office complex, similar to arrangement it already has with its Seattle headquarters, reports the Washington Business Journal.

On the positive side, Arlington police and other participants could gain access to Amazon’s tech, best practices, and intelligence-gathering methods. On the other hand, deeper collaboration and information sharing between one of the nation’s biggest corporations and law-enforcement sounds kind of Orwellian.

“Amazon can take a leadership role in the region and establish a new NOVA/Washington DC Regional Security Council (modeled after the Greater Seattle Security Council),” wrote Florence Chung, in charge of Amazon’s public-private partnerships, in an Aug. 1 email. It would “promote collaboration and information sharing between security leadership from both the private sector and public sector.”

The partnership is designed to promote safety on Amazon’s campus, which eventually will employ 25,000, and extend “beyond the perimeter” to Virginia Tech’s proposed innovation campus, a nearby “bar district” and other neighbors in the “Amazon community.”  The heads of Arlington County’s police, fire department, and 9-11 call system have engaged in conversations and meetings with Amazon for several months.

In addition to the formal collaboration, security-related topics include barricades designed as benches at Metropolitan Park, external-facing cameras, pedestrian safety, and “security robots.” Also discussed has been possible “campus edition” of Ring and the Neighbors App for the Virginia Tech campus and Marymount University. Ring, a doorbell-camera company, gives officers the ability to request camera footage from Ring camera owners.

For its part, Arlington police have sought information on Amazon tools for “effectively ingesting large amounts of data (social media, video, etc.) and quickly synthesizing it for action.”

Bacon’s bottom line: Technology is a double-edged sword. I’m all in favor of harnessing tech to promote public safety. People have a right to feel secure in public spaces. On the other hand, I’m really nervous about the pooling of big data for purposes of gathering “intelligence,” especially in combination with increased video surveillance. I know, I know, Amazon and Arlington aren’t communist China. But once this capability is developed, who knows how it will evolve and who will get their hands on it.

This entry was posted in Crime , corrections and law enforcement, Science & Technology and tagged Amazon, James A. Bacon. Bookmark the permalink.