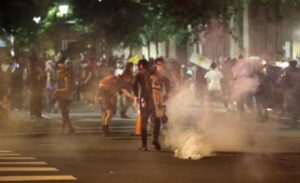 Progressives everywhere consider their precious theories more important than actual outcomes. The fact that people get hurt along the way is part of the price they willingly pay for political power.

In fact, you only need to know two key ideas: critical theory is radically skeptical that objective truth exists and can even approximately be known, and it forwards the competing view that knowledge is just an assertion of politics by other means.

That is, the key of critical theory as a social philosophy is that whether a claim is true or not doesn’t matter and misses the point. All that matters is how that claim can be used politically to gain power.

So let’s look at critical race theory in action in public security.

American is turning into the haves and have nots in terms of policing. Cops are leaving progressive-run cities for more welcoming locations.

No wonder there are 5,000,000 new gun owners this year. I count myself among them. I learned how to use weapons in the military but never thought to own one in my 25 years of retirement until this year.

What will happen in progressive cities is that the wealthier parts of each city and their commercial sector will hire private security. That is already happening at a breakneck pace in NYC and other cities.

And the poorer sections of those cities and poorer businesses will be left to fend for themselves. How exactly does any thinking person imagine that will work out?

But progressive destruction of the culture is not limited to public security and order.

As is their want, progressive leaders, in their cocktail party chatter-driven search for approbation among their like-minded friends, hurt the people they claim to be helping.

So, seriously, take account of where you live.  If you are in a progressive-run city, move if you value public order, good schools, drug-free places for your children to play, and all the rest of what we consider a supportive culture and civil society.

That is not a political statement, but rather an acknowledgement of the facts on the ground.

6 responses to “All Public Order, Like All Politics, Is Local”