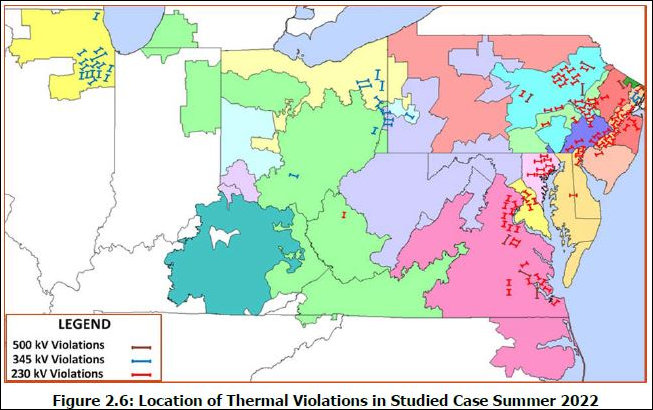 If Virginia and other states in the PJM wholesale electricity market want to shut down their coal and nuclear plants, they had better start upgrading their electric transmission grids or face the risk of extensive overload and failure in extreme weather events. That’s one of the conclusions that can be drawn from a North American Electric Reliability Corporation (NERC) study published yesterday that explores the impact of coal and nuclear power plant retirements on electric grid reliability.

Generator retirements are occurring, disproportionately affecting large baseload, solid-fuel generation (coal and nuclear). If these retirements happen faster than the system can respond with replacement generation, including any necessary transmission facilities or replacement fuel infrastructure, significant reliability problems could occur.

Therefore, resource planners at the state and provincial level, as well as wholesale electricity market operators, should use their full suite of tools to manage the pace of retirements and ensure replacement infrastructure can be developed and placed in service. Again, ensuring reliability throughout a significant retirement transition will likely include construction of new transmission and fuel infrastructure.

The scenario examined by the NERC report is not a predictive forecast for 2022. It is designed as a “stress-test to identify risk” during extreme weather events. As the map above shows, there are significant risks for Virginia, which, despite the closure of several coal-fired power plants in recent years, is still heavily dependent upon coal- and nuclear-fueled electric power both originating within the state and imported from outside. When generators are retired from one location and are replaced by resources from another location, power flows shift. The electric grid, designed for one system, may require extensive upgrades in order to accommodate that shift.

The issue is more than academic in Virginia, where electric utilities are under heavy political pressure to close remaining coal plants in the short run and nuclear plants in the longer run, and to restrict the addition of new gas-fired generators or gas pipelines. At the same time, efforts in Virginia to build new transmission lines or upgrade old ones have encountered heavy opposition and experienced significant regulatory delays, meaning that it could take many years to re-tool the electric grid.

The NERC report also raised the issue of fuel source diversity. As coal and nuclear are phased out, the electric grid becomes increasingly dependent upon natural gas, solar and wind. Solar and wind are intermittent energy sources and cannot be dialed up and down as needed during periods of extreme heat and cold. Natural gas is constrained by pipeline capacity, which can be compounded by accidents and other interruptions. Since 1998, almost 800 serious pipeline incidents have been recorded.

“Having up to 90% of the generation fleet relying on a fuel shared between industrial and residential customers as well as the bulk electric generation,” said NERC, “would expose the power system to a reliability risk. Nuclear and coal ensure fuel diversity, which is necessary to protect the reliable and affordable flow of energy.”

The study gave particular attention to the 13-state PJM transmission system, of which Virginia is a part. The stress-test scenario simulated the deactivation of all coal and nuclear, and replace the capacity with natural gas.  The key finding:

Environmentalists have argued that a decentralized electric grid built around clean solar and wind can be resilient. However, any such system would require massive battery storage capacity, and there is no indication that utility-scale battery storage for purposes of load shifting (as opposed to fine-tuning grid voltage and frequencies) will be an economic proposition in the near- to mid-term future.

In what should serve as a warning to Virginia, the NERC study said: “As electric transmission is very time consuming to design, site, and permit, transmission planners and operators must be prepared to use various mechanisms, either in- or out-of-market, and could include steps to delay generator retirements until these transmission upgrades are completed.”