About those Boogaloo Boys… 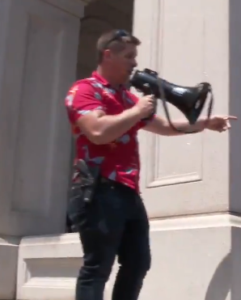 “Last night shows that the real hate comes from the racism that is still very much alive in our commonwealth,” Stoney said in a press conference. “And some have used this moment to still express that hate.” Police Chief Gerald Smith confirmed that a few white men in Hawaiian shirts — an emblem of the so-called boogaloo movement, which incites violence to accelerate society’s plunge into civil war — were spotted in the crowd. Smith did allow for the fact that others among the rioters were involved with or influenced by the left-wing antifa movement.

Just one problem with Stoney’s narrative: He has no direct evidence showing that white supremacists organized the protest, encouraged violence, or participated in property damage. That’s the conclusion of Graham Moomaw with The Virginia Mercury, a left-leaning online publication. Moomaw and the Mercury deserve credit for publishing a well-researched article that runs counter to the liberal/progressive narrative. My esteem for the publication has increased a notch. Maybe two notches.

Saturday’s protest-turned-riot was promoted in an online flier of unknown origin that urged Richmonders to show solidarity with Portland, Ore., where predominantly white protesters have laid siege to the federal courthouse. “By sharing, attending and leading the March, the Mayor and Chief believe the boogaloos share responsibility for the violence that took place that evening,” Jim Noland, Stoney’s spokesman, told the Mercury.

However, Moomaw found that police have not connected any of the nearly two dozen people arrested last weekend to white supremacist groups.

Indeed, Moomaw talked to Richmond boogaloo organizer Mike Dunn, who calls himself a centrist libertarian. Dunn insists he is not a white supremacist. He has appeared in solidarity with the BLM757 group in Richmond, chanting, “white supremacy sucks,” and he says his group left the protest before it turned violent.

JaPharii Jones, leader of BLM757, said he does not believe Dun is a white supremacist. Rather, said Jones, Stoney wanted to portray himself as standing up to white supremacy. “It’s all politics. He had to have somebody to put the blame on for that.”

Dunn may be a “centrist libertarian” in philosophy, but he was kicked off Facebook for a video in which he bore an AR-15 rifle while demanding Gov. Ralph Northam’s resignation. his words are anything but pacific. “If there had been white supremacists there we would’ve fought ’em,” Dunn said of Saturday night. “We fought ’em on July 4 when three of them ‘Heil Hitler’ed’ in our crowd.”

Bacon’s bottom line: The presence of boogaloo boys in the Saturday march highlights just how fractured the demonstrations are. There are militant black-rights groups such as Black Lives Matter, predominantly white anarchist groups such as Antifa, boogaloo boys, perhaps a sprinkling of actual white supremacists, and maybe even some genuinely peaceful protesters. Blaming white supremacists for the Saturday violence was a pathetic attempt by Stoney to shift the blame for his own inability to maintain public order.

Update: The original post contained a photograph taken from the Virginia Mercury website. However, I have been informed that the photo belongs to Getty Images, which the Mercury subscribes to. I do not subscribe to Getty. Having been nicked for $2,000 last month for posting a copyrighted photo  (grrrrr, what a racket!), I deemed it wise to replace the boogaloo boys photo.