A Win-Win Transit Solution for Norfolk 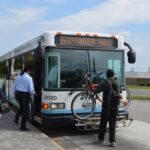 When I see evidence of positive performance, I highlight it… which brings me to today’s post. Before the COVID epidemic, a major overhaul of Richmond’s bus routes gained 1 million riders, a 17% increase, by reorganizing its bus routes. Now Norfolk is hiring the same consultant who transformed Richmond’s bus routes to re-engineer its own mass transit network.

The proposed reorganization of routes would put 140,000 more Norfolk residents within a quarter mile of a bus or train arriving every 15 minutes for most of the day, an increase of 57% over today. The average person will be able to access 31% more jobs than with the existing network. All without spending more money.

“Here in Norfolk we have a bus system that hadn’t been reviewed or updated in decades,” said Andria McClellan, a city councilwoman and Democratic candidate for lieutenant governor. “All the tiny changes over the years left us with a lot of spaghetti-style routes that were added for political reasons and not because they actually met the needs of our current riders.”

Let me repeat the operative sentence to make certain it penetrates readers with thick skulls: “All the tiny changes over the years left us with a lot of spaghetti-style routes that were added for political reasons and not because they actually met the needs of our current riders.”

One reason mass transit is such a mess is that transit agencies are publicly owned, hence responsive to the demands of elected politicians whose primary interest is making constituents happy, not running a low-cost operation. Because public agencies are not profit-maximizing institutions, efficiency is a secondary concern. They are prone to inertia and resistant to change. When service suffers or revenues fall short, the path of least resistance usually has been to hit up the taxpayers.

“In a lot of mid-sized cities the bus networks haven’t really been looked at and rethought in a holistic way maybe ever; they just evolved over time from taking over old streetcar lines,” said Scudder Wagg — a senior associate with Human Transit, the firm conducting Norfolk’s redesign. “We’ve seen so many bus route redesigns over the last decade because cities are now bursting with population growth again. The recent renaissance in Norfolk’s downtown and around Old Dominion University is what has driven this process.”

Mass transit has become so inefficient in many municipalities that consulting firms like Human Transit make a great living by showing them how to tighten operations and improve service at no extra expense. This is what I call a “win-win” proposition — the kind of solution that an opportunity agenda would champion. Kudos to Richmond and Norfolk for going this route. Maybe Virginia’s other transit systems can learn something.

12 responses to “A Win-Win Transit Solution for Norfolk”