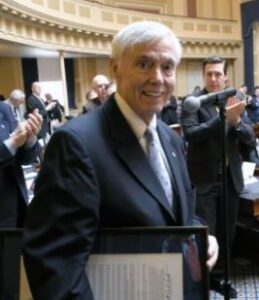 It’s not often that we see our friends at the Thomas Jefferson Institute for Public Policy (TJI) get recognition in established media. The younger generation of reporters gravitates toward studies and reports published by left-leaning advocacy groups, seemingly living in a universe in which informed conservative opinions do not exist. So, I’m delighted to see that the Richmond Times-Dispatch has highlighted the announcement that former House Speaker William J. Howell has joined TJI as chairman of the board of directors.

“He’s a superb fit,” said Chris Braunlich, president of the 24-year-old institute. “He brings to our institute the knowledge of the workings of the General Assembly.”

“There is a need for a vigorous, free-market, center-right organization that can help develop good policy, promote good policy and ensure that it works,” he added in a Thursday interview.

Not surprisingly, the reporter who picked up the story was Michael Martz, one of the RTD’s longest-serving and most nonpartisan reporters. He still hews to the practice, discredited in some journalistic quarters, of actually seeking out viewpoints at odds with the progressive shibboleths of our time. Virginia may be a solid blue state at present, but 44% of the electorate did vote for the Republican presidential candidate (he who shall not be named), and TJI is the only think tank in Virginia that carries the banner for small-government, low-tax, pro-business conservatism. So, kudos to Martz.

TJI and Bacon’s Rebellion have close informal ties. Steve Haner, one of our regular contributors, works for TJI. Bacon’s Rebellion and TJI frequently cross-post columns. We extend our best wishes to the organization under its new stewardship.