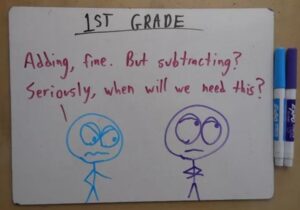 Someone needs to teach Washington Post reporters basic arithmetic. In an article published today, writers Nick Anderson and Susan Svrluga write how Virginia’s higher-ed institutions face a “racial reckoning.” That reckoning won’t end with the purge of memorials to men who were slaveowners and segregationists, or when memorials are erected to acknowledge the contributions of Americans of African descent. Scrutiny on matters of race, they say, extends to “the chronic underrepresentation of students and faculty of color.”

The WaPo approvingly quotes Michaela R. Hill, president of the Black Student Organization at the College of William & Mary, as saying more needs to be done to promote diversity at W&M. The Black share of enrollment there — about 7% — “does not reflect the state,” where the Black population is 19%. The Black population nationally is 12%.

At many schools in Virginia, federal data shows the Black share of enrollment in 2020 trailed those benchmarks: George Mason University (11 percent), Richmond (7 percent), the University of Virginia and VMI (both 6 percent), James Madison University and Virginia Tech (both 5 percent). The share at Washington and Lee was 4 percent.

The mathematical impossibility becomes even more obvious when you consider that the Virginia high school graduation rate for African Americans is 90% compared to 95% for whites and almost 99% for Asians, and downright glaring when you consider the disparity in graduation rates of young people who are academically equipped to do college-level work.

For example, students need to pass Algebra II to graduate from high school and gain admittance to four-year universities. Here are the Standards of Learning pass rates for the 2020/21 school year broken down by race/ethnicity:

Ninety percent of Virginia public high school students might be graduating, but (except for Asians) that does not mean 90% are proficient in the skills required to graduate, much less to perform college-level work.

Every Virginia four-year university has expressed its commitment to diversity and has set a goal of increasing enrollment of African-American students. But they are fighting the fact that there is a smaller pool of African-American students graduating from Virginia high schools. We can have an interesting discussion of why that is so and what can be done about it, but that won’t change the mathematical facts.

The end result is an intensified competition for qualified African-American students. Insofar as the University of Virginia, a richly endowed institution with more resources to devote to financial aid, is successful in recruiting more African Americans, that leaves fewer for everyone else. Insofar as ODU and Virginia Commonwealth University, which pride themselves on their recruitment of first-college-attendee-in-the-family students, are successful, they leave fewer for the rest. The same goes for everyone else. Indeed, if Ms. Hill gets her way and W&M recruits more Blacks, W&M’s success might well come at the expense of HBCUs like Norfolk State or Virginia Union! Does anyone want that result?

The trope that every institution (except the HBCUs) must “look like Virginia” is based upon a mathematical impossibility, and those who give it legitimacy are either innumerate or intellectually dishonest. Increasing the percentage of African Americans in college is a worthy goal. But creating a for-every-winner-there-is-a-loser competition for Black students is not the answer. We must address root causes in our public schools and, even earlier, in what children learn at home before they reach school age, to deepen the pool of college-ready kids.