A kWh Saved Costs Triple A kWh Used. You Pay. 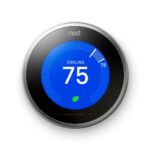 Third generation Nest programmable thermostat. You may be asked to buy one for your neighbor, with a sweetener for Dominion.

Buying yourself a kilowatt hour of electricity costs about twelve cents.  Persuading your next-door neighbor or the store at the corner to use less electricity is three times as expensive, costing about 35 cents per kilowatt hour.

That figure comes from a fresh exhibit filed by Dominion Energy Virginia with the State Corporation Commission, an exhibit only filed because a member of the court asked a simple question from the bench:  What has all the spending on energy efficiency programs cost to date and what has been the result?  If that information was buried in the thousands of pages of data on the case, he hadn’t found it.

The data Judge Mark Christie sought appeared on the case record Wednesday, here (see page 4), with a bottom-line cost of $198.8 million dollars to save (net) about 570 million kWh.  That works out to 35 cents per kWh saved.  The report covers all the energy efficiency programs for Dominion from their first authorization in 2011 to the end of 2017, about six years.

The report is cumulative and does not indicate how much electricity Dominion avoided selling year to year.  But had it avoided the entire 570 million kWh over one year, that would still be less than the output of a small 100 MW generating unit operating at 75 percent capacity for that year.  Looked at another way, that 570 million kWh, or 570,000 megawatt hours, is less than one percent of the 77.7 million MWh Dominion generated in 2018.  It’s a rounding error.

The 17 different programs have run for different periods of time and overlap in their activities.  Many are among the programs Dominion is seeking to continue, tweak and expand in this new review of its efforts, supercharged by a legislative directive in the 2018 Ratepayer Bill Transformation Act.  That law mandates $870 million in new spending (paid by ratepayers) through 2028 and Dominion is before the SCC seeking permission to increase the rate adjustment clause on monthly bills which pays for all this.

The issue isn’t the wisdom of energy efficiency and conservation.  Smart homeowners and business managers focus on that.  The issue is how do you motivate those not otherwise interested, and if you do that with cash, who provides the cash?  The General Assembly says we do.

Down at the General Assembly, a hearing room packed with lobbyists and lawyers usually indicates money is changing hands in the legislation on the docket.  The same phenomenon was on display Wednesday of last week during the packed hearing on the pending energy efficiency programs.  Hundreds of millions of dollars from ratepayers will be spent on contractors, equipment and incentive payments to participants – some who need the money and some who don’t.  Also included will be overhead and profit for the utility.

Most of the argument March 20 and in the case’s written record has been over the question of whether the $870 million legislative mandate did or did not include payments for lost revenue.  Dominion has now unilaterally agreed not to claim that as part of the spending cap, leaving more on the table for…contractors, equipment and incentive payments, plus utility overhead and profit.

The first step in any hearing is testimony from the public, and the first public witness was a gentleman from Google.  Google manufactures and sells programmable “smart” thermostats, one of the things approved contractors will install in the course of these efficiency upgrades.  Not too surprisingly, “if they provide an incentive, it increases the installation rate,” he testified.

He also praised a Dominion proposal to add a new program, already used by numerous other utilities, where the company operates its own on-line store for energy efficiency products, directly competing with other retailers and enhancing that competition with cash incentives.  Other ratepayers, of course, provide the cash for the incentives.

The Google witness called that “a very powerful market channel, because utilities have credibility with their customers.”  In response to a question from Judge Christie, he conceded Google is not yet one of Dominion’s suppliers.  Here is an example of such a marketplace, for PPL in Pennsylvania, which does offer Nest thermostats.

You can get some idea how the existing energy efficiency programs work by perusing Dominion’s own propaganda on success stories.  Virginia Family Dentistry is presumably a thriving and profitable business, yet we paid it $383 to install window film (also our cost) which reduces solar heating on its premises, reducing its cooling costs.

A small manufacturer received a $27,000 incentive (from us) to install more efficient water chillers for use in its process, saving 22 percent on its energy bill.  What possible sense does it make to pay a manufacturer to do something with that kind of payback, something it could afford to do and should do without any cash from our pockets?

Some of the programs are aimed at homeowners without the means to buy more expensive LED light bulbs or a new high efficiency heat pump or refrigerator.  Installing the new efficient lighting has been the low-hanging fruit over the years.  Programs where the utility takes control of your thermostat or turns off your air conditioning on hot days have the highest cost-benefit results of all.

Such an offer appeared in customer bills recently, a $40 cash incentive if you would let the utility install a cycling switch and turn off the air at times of its choosing next summer.  In the new batch of programs, people will be asked to give over control of their thermostats (Google hopes one of theirs) to the utility for what is called a demand response program.  It even passes the cost-benefit test the advocates hate.

That’s the future, and the real potential for demand management will arrive if Dominion ever builds that true smart grid it talks about but never delivers.  The utility and its customers will have real time usage data, and the company can move toward time of day pricing.  What we have now is like that story with the blind philosophers trying to describe the elephant by feeling each part.  The energy efficiency plan, the integrated resource plan and the (still awaited) revised grid plan might as well be separate animals.

Or, as environmental attorney Nate Benforado said in one of the more cogent statements of that day-long hearing last week, “our belief is Dominion lacks a long-term strategy” and is offering up things “piece meal.”  Which would be easier to watch if it were the utility’s money, not ours, going down the drain.