A Jewish Community Heartbroken and Distraught 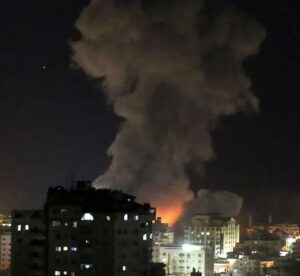 Richmond’s Jewish Community has watched the developments in Israel and Gaza with sadness, empathy and trepidation. The suffering of innocent Israelis and Palestinians is unacceptable. We are pained by the ways in which this conflict is being misunderstood and mischaracterized by some members of the media and our communities. They cling to a mistaken belief that the Israelis are the aggressors in this situation and that blame for the current hostilities can be laid squarely on Israel. This has led to an increasing sense that conflict abroad is contributing to increased hatred and attacks on Jews here at home – to an
unprecedented degree.

In the recent op-ed “We Can’t Breathe” in the pages of the Richmond Times-Dispatch, Michael Paul Williams repeats falsehoods and longstanding canards that don’t reflect the realities on the ground and diminish the plight of both Palestinians and Israelis. Additionally, he works to undo decades of strong, collaborative connections between the Jewish and Black communities in Richmond.
This complex geopolitical conflict, in which long simmering grievances have festered on both sides for decades, cannot be reduced to a blanket indictment of the Israelis. This is no time for divisiveness, for chastising and condemning. And it is certainly never a time for antisemitic harassment and violence to take advantage of these tragic events. It is impossible to advance the cause of peace by being confrontational, one-sided, and by having a reckless disregard for the truth.

The truth is that Hamas, a terrorist group, wholly focused on the destruction of Israel, has carried out its attacks by barraging Israel with more than 4000 rockets. These rockets are deliberately fired at Israel’s civilians, and are fired from, and stored in, Palestinian civilian areas like homes, schools, and hospitals to discourage retaliation by the IDF, which Hamas knows is under strict orders to avoid civilian casualties. By contrast, the IDF issues warnings in Arabic when planning a response, so that civilians have time to evacuate.

The narrative … is one of misinformation and historical revisionism that ignores the thousands of years of history that connects Jews to the land of Israel. You cannot ignore the constant Jewish presence in the land and how the dream of RE-establishing Israel came from the longing of an indigenous people who were exiled- but always dreamed to return, which many did when it was clear that the Jewish people needed a sanctuary from a legacy of global persecution. Israel was once again a refuge for Jews from all over the world – countries from Africa to Europe and the Middle East, many fleeing expulsion or violence.

This is an issue of two peoples claim to the same land. At its inception, the Jewish claim was refuted by many Arab nations, who attacked the fledgling country immediately. Had it not been refuted then, and many times since, and had negotiations that the United States had helped broker proceeded further, there would be today a Palestinian State alongside a Jewish State.

The refrain that was echoed in “We Can’t Breathe” is that this is also an issue of white versus people of color. The Jewish community locally and especially in Israel- includes many Jews of color. In fact, it is estimated that only 30% of Israel’s citizens are white Ashkenazi Jews of European descent. To even imply that Black and Jewish communities must be at odds shows a complete lack of understanding of the Jewish community and her diversity. It also ignores the
decades of shared work done by our communities to combat racism, white supremacy, and shared prosperity.

Unfortunately, the generalization that Jews look like one kind of image goes hand in hand with bias that is at the root of prejudice and ancient antisemitism.
Both Israeli and Palestinian civilians undeniably have the right to live in peace and safety. We in the United States need to do all that we can to support the cause of peace. Indeed, it is gratifying to us that President Biden has affirmed our nation’s support for Israel’s right to defend itself against attack during this crisis.

We are grateful that peace has returned and that both Israelis and Palestinians can resume their daily lives free from fear. There is only one route to a lasting peace: an end to terrorist attacks and the resumption of a political process between Israel and the Palestinian Authority. May that come speedily and in our day.

Ellen Renee Adams and Daniel Staffenberg are CEO and president respectively of the Jewish Community Federation of Richmond. This column is being published simultaneously in Bacon’s Rebellion and the Richmond Times-Dispatch.

This entry was posted in Race and race relations and tagged Guest contributors. Bookmark the permalink.