A Horse Built by a Committee

Virginia’s Attorney General has offered a bill to create a new state bureaucracy to handle the opioid settlement money about to flow into the Commonwealth to support prevention, treatment, and recovery. It is going to be a lot of money. The state opioid settlements will not be the end of it.  Federal money is coming for the same purpose.

According to the CDC, opioids—mainly synthetic opioids (other than methadone)—are currently the main driver of drug overdose deaths.

East of the Mississippi river, the legal product that kills is commercially produced opioids illegally prescribed and filled.  They include:

Look below at the CDC map showing Opioid prescription dispensing rate  and see the dark scar through the Appalachians showing more than 112 prescriptions per 100 persons. 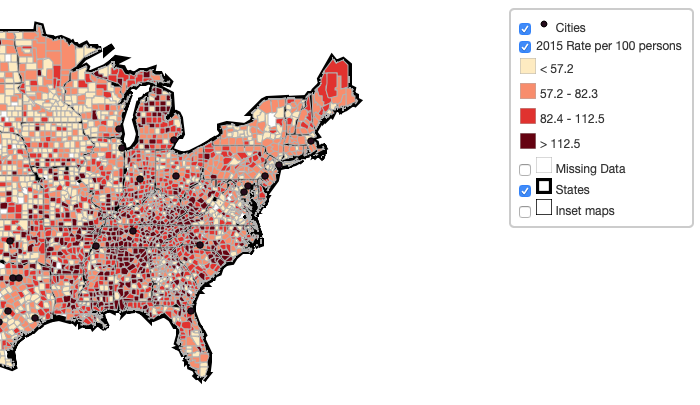 The illegal product that kills is Chinese fentanyl and Mexican heroin, both brought into the states by Mexican drug cartels.

Virginia is in the middle third of the states in drug overdose death rate in 2017 – 2018 at over 400 and 326 respectively. But it was also one of 18 states that showed significant increases in non-fatal opioid overdoses between February 2019 and February 2020. The difference was major increases in reversal of overdoses to prevent death using Naloxone.

According to the CDC National Center for Health Statistics (NCHS), some of the highest death rates in America from these drugs, legal and illegal, are concentrated in Virginia’s Appalachian and Blue Ridge counties and cities.

Overall, opioid abuse is a national scourge, but disproportionately concentrated.

Del. Charneille Herring, D-Alexandria, has introduced HB 2322 and Sen. George Barker, D-Alexandria, SB 1469, identical bills, to carry out the AG’s plan. It proposes a politically appointed commission to “establish criteria for awards, review applications, decide on the distribution of funds, and evaluate the implementation and results of awards.”

The OAA will be led by a board consisting of 11 members: (1) the Secretary of Health and Human Resources; (2) the Director of Senate Committee on Finance and Appropriations; (3) the Staff Director of House Committee on Appropriations; (4) an elected member of a local governing body to be selected from a list of three submitted by VACo and VML; (5) a CSB representative from an urban or suburban region; (6) a CSB representative from a rural area; (7) a local sheriff; (8) a city or county attorney; (9) and (10) two medical professionals; and (11) one representative of the addiction and recovery community.

OAA will establish criteria for awards, review applications, decide on the distribution of funds, and evaluate the implementation and results of awards.

Awards can only be made for opioid-related items, but can include treatment and recovery programs, support for specialty court dockets, and a wide range of prevention measures.

OAA is required to give priority to applications that: (1) collaborate with an existing successful program; (2) support treatment or prevention in a community with a high incidence of opioid use disorder; (3) address opioid treatment in a historically economically disadvantaged community; and (4) include a monetary match from the locality.

From the Richmond Times Dispatch :

“Officials from the Office of the Attorney General, which helped craft the legislation to create the authority, said there are no estimates available for how much money Virginia might get. But Michael Kelly, the attorney general’s chief of staff, said it could start coming in soon.”

“When that moment comes, we don’t want the Commonwealth to have to delay the spending or scramble to figure out what to do with the money,” he said in an email. “We are proposing this structure now so that if judgments or settlements materialize we can help get as much money out the door as quickly as possible to support prevention, treatment, and recovery.”

Perhaps we should ask why the AG thinks the government of Virginia would need to “scramble” to receive and spend the money instead of already having a plan. That money has been coming for years.

I propose it will be far more efficient and effective to use the structures the state already has in place for receiving money and spending it rather than starting over with a new commission.  I hesitate to call this a proposal to set up a politically-controlled slush fund, but others may differ.

The AG and the State Police and local police and prosecutors should continue to enforce the laws.

A list of the worst offender pharmacies in Virginia is available from DEA’s Automated Reports and Consolidated Ordering System (ARCOS) to which manufacturers and distributors report their controlled substances transactions including with retail outlets.

I hope Virginia is fully on top of stopping the illegal distribution of legal drugs by physicians and pharmacies, but if additional funds are needed, request it.

As for street drugs, work with the DEA and jail the smugglers and distributors. Same answer as for illegal distribution of legal drugs. If more money is needed, request it.

Leave prevention, treatment and recovery to the Department of Health, whose responsibilities they already are.

The AG says we need a new commission.  He thus backhandedly accuses VDH of not being up to the task. VDH is inevitably already working with CDC and attempting to employ CDC’s evidence-based strategies.  If it needs more money, it can ask for it.  VDH might not succeed, but then what chance does this new commission starting from scratch have?

It turns out that Virginia as a state:

But most of those workers are not where the problem is concentrated. And those that are there make far less money than elsewhere in the state.

So, Virginia has negative wage incentives to get the workers that need to help to where they are needed.

All of those workers have college degrees, and all pay for those degrees. Most of them want to live and raise their families in the suburbs or cities. That is an issue with every medical profession. All are in short supply in rural America.

Thus we are going to have to provide significant monetary incentives to get the substance abuse treatment and recovery professionals from where they are to where they are needed. It doesn’t take a commission to figure that out.

And they need to be hired and managed by organizations that know how to make them comfortable and successful in their work. If the VDH does not have metrics on the success of such organizations, it should get some.

We absolutely cannot stand for the useless and endless debates that will occur in a commission about whether those organizations should be government, non-profit or commercial. Go online. That is what is being discussed in the wake of this story, not what should be done, but who should get the money.

A commission tasked with spending the money will certainly do so. Nothing else is assured.  A few of the questions to be answered are:

I strongly recommend the General Assembly put the money in the General Fund and use the budget processes and government organizations in place to spend it.

One argument  against that is that the Governor and General Assembly are too undisciplined to avoid using the money for other purposes. The AG clearly concurs.

Okay, then be disciplined; use the system as it exists.

And kill the bills.