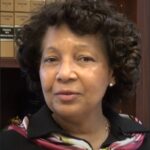 Governor Ralph Northam has named Rosa S. Atkins as Virginia’s acting Superintendent of Public Instruction to replace the departing superintendent, James Lane. Atkins served 15 years as superintendent of the Charlottesville public school system before retiring to join the Virginia Department of Education as assistant superintendent for talent acquisition and development.

“In Charlottesville, Dr. Atkins was a true pioneer as she engaged her community in courageous conversations and implemented strategic initiatives to expand opportunities for all students and eliminate disparities,” said Northam. “Throughout her career, she has made an amazing impact on public school students in Virginia.”

Atkins probably will be a short-termer, providing continuity until Governor-elect Glenn Youngkin announces his own selection for the position. But I was struck by Northam’s comment praising her for “courageous conversations” and initiatives to “eliminate disparities.” So, I thought I’d do some background research. As it turns out, Atkins has had an impact, but I wouldn’t call it “amazing.”

A Charlottesville City Schools press release announcing her departure this past summer listed some of her accomplishments.

Since Atkins’ arrival in 2006, both student achievement and graduation rates have risen, division student enrollment has grown, and Charlottesville has been consistently recognized as one of the top-performing divisions in the state. Suspension rates have fallen 80 percent and graduation rates for black students have risen 25 points, reaching 96 percent or above for the past two years.

The acid test is how well students perform on the Standards of Learning tests. SOLs don’t capture everything that students need to learn in school, but they have the advantage of being more objective and harder to game than any other measure. So, what was Atkins’ record presiding over the public schools in what is arguably the most woke locality in Virginia? (Sorry, Arlington residents, you’re only No. 2.) 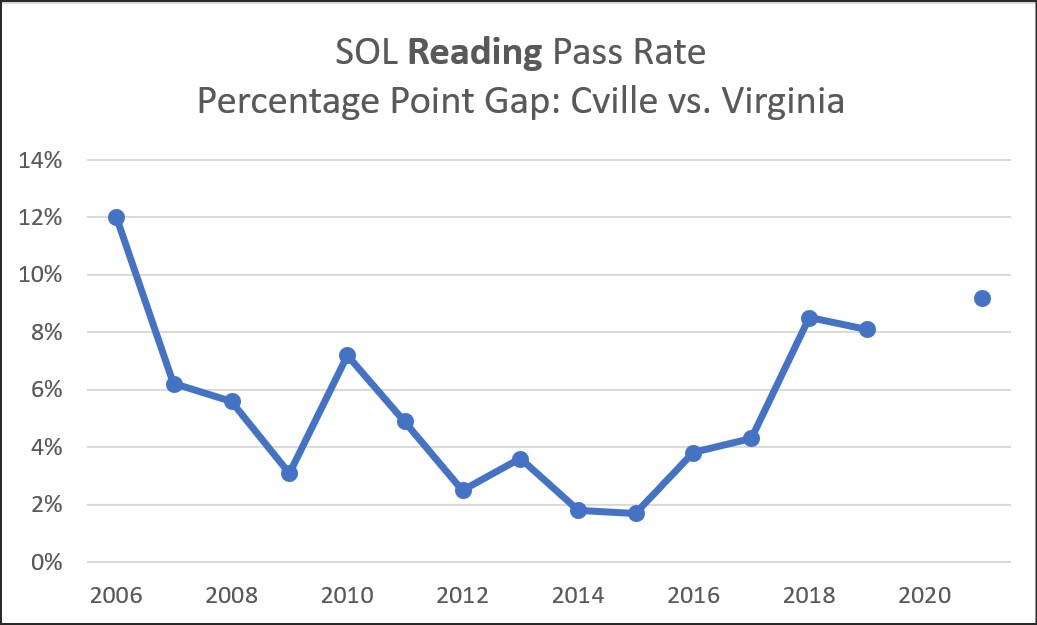 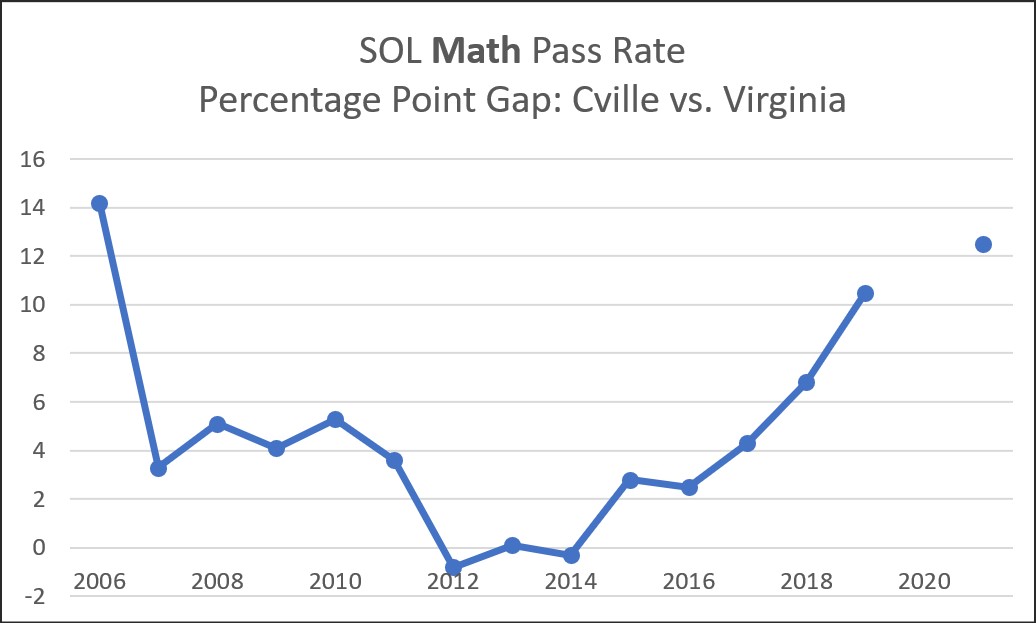 As can be seen in these two graphs, for several years Charlottesville public schools steadily closed the gap under Atkins’ direction. In 2012 Charlottesville students actually passed the math SOL tests at a higher rate than the statewide average — a significant accomplishment.

Then something happened. Around 2015 the gap began to widen. By 2021, Atkins’ final year, the gap between statewide performance and Charlottesville performance was nearly where it had been when she arrived.

What is the explanation? One clue can be found in the Charlottesville press release quoted above. Atkins embraced every trendy policy prescription in the “progressive” policy playbook.

She has supported the division’s nationally recognized work in social-emotional learning, mental wellness, trauma-informed approaches, and positive student supports. Her commitment to equity has made possible an expanding array of unleveled classes (leading to increased enrollment in honors, advanced placement, and dual enrollment classes), a redesigned gifted education program, and the creation of a dedicated supervisor of equity.

Surely, you say, she closed the gap between Blacks and other students.

Let’s look at the data. As with other urban school systems, Charlottesville has always seen a gap in the rate at which Black students pass their SOLs compared to other students. To measure that gap, I compared the Black student SOL pass rate for Reading and Math SOLs to the pass rate for all students. Here are the results: 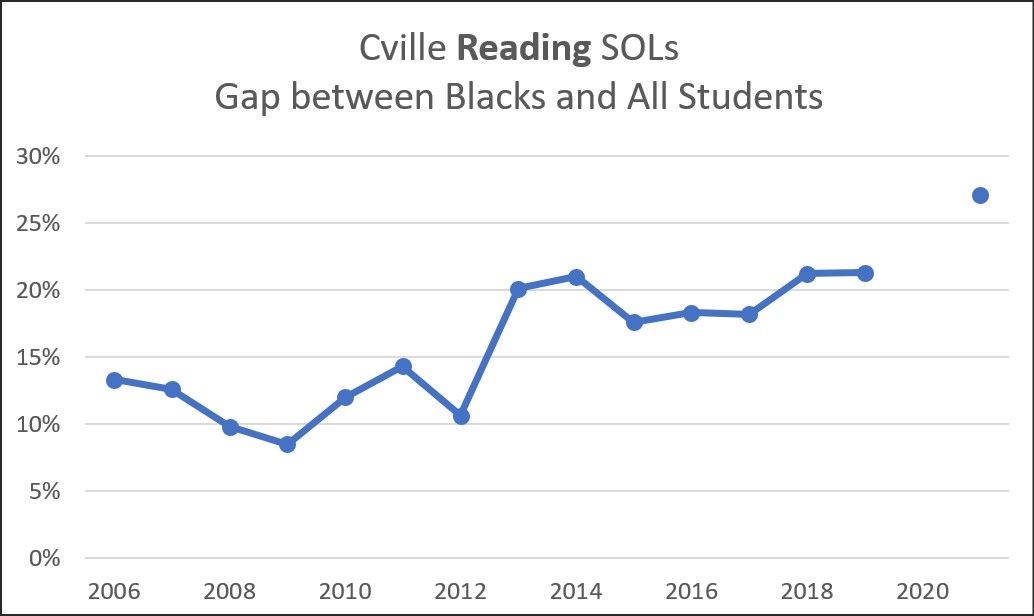 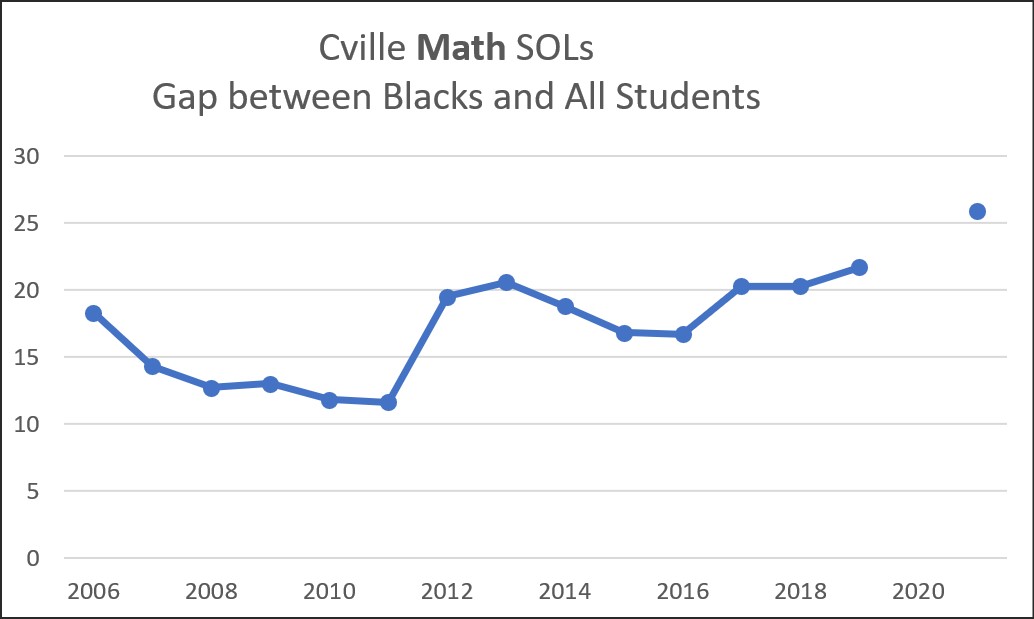 Atkins’ first few years as superintendent showed modest but steady progress in closing the gaps in reading and math pass rates. Then, as “progressive” policies took hold, the gap began widening. By 2019, the last pre-COVID year, the gap was the widest since SOLs began. By 2021, after a year of COVID-driven school closures and distance learning, the gap shot into uncharted territory. As with so many other urban school systems, Charlottesville’s collapse in Black educational achievement has been unprecedented.

Atkins was not the sole architect of this disaster. What happened in Charlottesville reflected national trends as “progressive” ideas took hold in U.S. education, and she enjoyed ample encouragement from Northam-appointed “progressives” in Richmond. It is astonishing that Northam sees Atkins’ tenure in Charlottesville as a success story — a sure indication that he has absolutely no clue what is happening in Virginia’s schools. Her appointment as acting Superintendent of Instruction makes a fitting bookend to Northam’s disastrous misrule of Virginia’s schools.