A Fairfax High School Principal Cracks Down on Cellphones in Classrooms 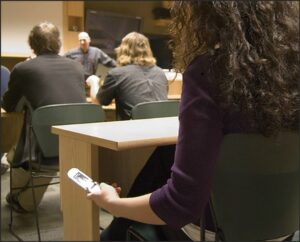 Virginia educators are waking up to the classroom disruption caused by cell phones, and one is actually doing something about it. On April 11, Herndon High School in Fairfax County started enforcing major restrictions on cell phone use, reports Fox News-Channel 5. More recently, the New Kent County School Board has directed the schools to look at the issue of cellphones in classrooms, according to The Tidewater Review.

“Students will be able to use their phone during passing times and during lunch time, but once class time begins, their phones must be turned off and put away,” said Princpal Liz Noto in a letter to the school community. “There are a few exceptions to this rule, including the use of the phone to monitor medical needs and some specific documented learning needs.”

There is one big loophole, however. According to the Fox article, teachers will be allowed to provide students a five-minute “phone break” during class.

Students’ use of cell phones has become a major problem in many schools. Practices may vary from place to place, but in some schools students are routinely distracted by access to social media on cellphones and listening to music through earbuds linked to their cellphones.

Speaking as an old geezer, we didn’t have cell phones when I was in school. I cannot imagine that use of the phones in the classroom would have been tolerated then. But the situation clearly has gotten out of control. Earlier this month I recounted the observations of a teacher in a high-poverty school who was lamenting the breakdown in adult authority at his school. There were many reasons for the endemic disorder, but the teacher cited cell phone use as one of the biggest contributors. Students get into altercations over social media, he says. His school could probably cut the number of fights by 75% if cellphones were banned. But use of the phones is so embedded and students are so addicted to them, he said, he cannot imagine being able to enforce a ban without causing an uproar.

It is good to see that at least one Northern Virginia high school is trying. The Fox News article was sparse on details, so we don’t know the reasons behind the principal’s initiative. But it is inconceivable that the principal would have initiated the crackdown if she didn’t perceive it as a big problem.

The Tidewater Review article sits behind a paywall, so the details of the New Kent County school board discussion are inaccessible. The one-paragraph summary available on VA News links the issue to the departure last month of Ronnie Cox, a  a longtime New Kent High School Teacher. Supporters say Cox was asked by the administration to leave following a verbal exchange with a student. Apparently, more than 100 students at the school staged a walkout to protest his retirement. One can conjecture that he had been involved in an altercation with a student over a cellphone.

I don’t recall cell phone use being a problem in the western Henrico high school which my son attended some six or seven years ago. I expect that practices vary from school district to school district, and between schools within districts. Perhaps the problem got worse after kids returned to school after the COVID lockdowns. I expect we’ll be hearing more about this problem, and I’ll keep readers posted.

This entry was posted in Discipline and disorder, Education (K-12), Uncategorized and tagged James A. Bacon. Bookmark the permalink.