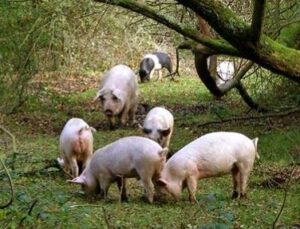 Under the Farm Animal Confinement Proposition, enacted four years ago California will begin enforcing provisions in 2022 that require farmers to raise pigs in spaces at least 24 square feet, up from 20 square feet in 2020. The good news is that pigs — one of the most intelligent and emotionally sensitive species on the planet — will enjoy better living conditions. The measure isn’t as good as letting pigs roam free, as is their right, but it’s a start.

The bad news is that it could mean less bacon!

California accounts for 15% of the national pork market, which effectively means it can dictate pig-raising standards across the country. The California rules would make it significantly more expensive to raise pigs. Which means fewer pigs. Which means less bacon.

This entry was posted in Bacon and pigs and tagged James A. Bacon. Bookmark the permalink.