A COVID Update Before the Winter Surge

As the election furor dies down, interest will turn to the expected winter surge in COVID-19 cases. Before we get caught up in the onslaught of dire predictions in the news and resultant handwringing over national and worldwide numbers, let’s look at Virginia’s numbers. 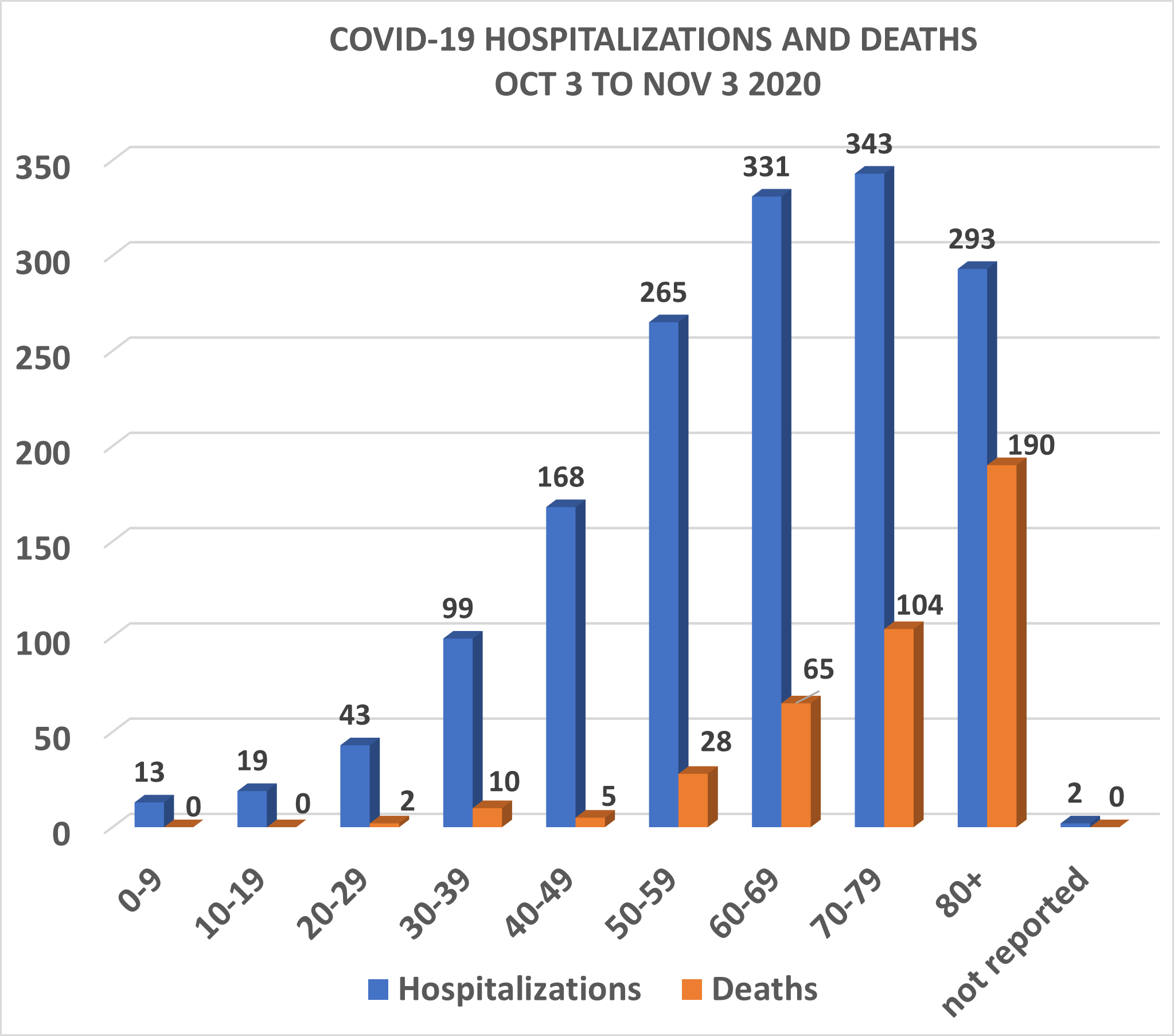 Long-term care facilities had 52 outbreaks between during that period with 1,666 cases and 174 deaths.

Where are the reports on what VDH is doing about infection control at nursing homes or Department of Social Services at assisted living facilities? Is anything being done, or are there inadequate numbers of staff to cope with the need? How much of the CARES funding has been directed to these efforts?

Although not as dramatic as outbreaks in long-term care facilities, correctional facilities had 10 outbreaks with 845 new cases and 8 deaths in the past month. If news reports are accurate, these outbreaks are too often the result of failing to isolate and test new arrivals before introducing them into the general population, failing to isolate those who become ill, and failing to supply adequate handwashing supplies and masks.

Virginia Numbers Since the Pandemic Began

Of 185,836 cases in Virginia since the pandemic began, this is the breakdown by age group:

Public health measures should focus on the number of serious illnesses requiring hospitalization and deaths. So, besides better control of infection outbreaks in closed settings, we might ask where are the public health campaigns to address factors such as obesity, hypertension, diabetes, and Vitamin D deficiency that can lead to serious COVID-19 illness? Such campaigns would improve public health in general, even for citizens who do not get the virus.

Testing in Virginia has not been adequate to define the extent of community spread as it occurs. RAND Corporation has said a number of times in their weekly reports that 5% testing positivity is a target for a successful test-and-trace policy.

Every time the positivity number went over 5%, it wasn’t necessarily an indicator that people weren’t following mitigations, as the Governor implied in press conferences. It was just as likely those with the virus were exposed and infected by people close to them who were asymptomatic, pre-symptomatic or so mildly ill they didn’t recognize it as COVID-19 and were not identified by testing. Total case numbers are not the issue. If test and trace is the policy, then more testing needs to be available where needed whenever positivity spikes.

There’s no need to hobble the economy by lockdowns. More openness about events causing small spikes in communities would be of more help. A weekly report, not necessarily by community, but by type of event, might keep people alert to the risks of gatherings like weddings, funerals, religious attendance, or family celebrations.

Now is the time to act where we can to inform citizens and for state agencies to redouble efforts to control institutional outbreaks, not after the surge blows up in the reports and causes panic responses.

Note on methodology: The Virginia Hospital and Healthcare Association (VHHA) reported 2,688 cases during this time. The number differs from the that of Virginia Department of Health (VDH), which counts only those hospitalized at the time VDH is first notified. If someone enters the hospital after that first report, VDH does not track it. Because VHHA does not report by age group, I have used the hospitalization numbers based on VDH reports.