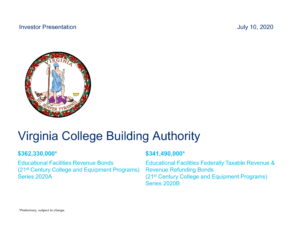 Gov. Glenn Youngkin has reported to the General Assembly that the state can expect to bring in an additional $1.25 billion in general fund revenue in the current fiscal year. This is an astounding mid-session revenue projection. He is proposing that the state “give it back” to taxpayers.

Of the projected $1.25 billion in additional revenue, under the provisions of the state constitution, about $499 million would have to be deposited into the state’s rainy day fund, leaving approximately $751.4 million.

The Governor obviously thinks there is already enough general fund revenue to fund the operating and capital needs of the Commonwealth. I could identify a few, relatively small items that I feel should be better funded than they are, but I will desist. Instead, I have a proposal that should appeal to conservatives everywhere — pay off some of the Commonwealth’s credit card balance.

The Commonwealth has relied almost exclusively on bonds in recent years to finance its capital construction program. Each Appropriation Act has authorized the issuance of hundreds of millions of dollars in bonds for which general fund revenue is pledged to cover the debt service.

Typically, it takes a state agency several years to complete a capital project, particularly major ones. Therefore, for arbitrage reasons, the Department of the Treasury does not issue (sell) bonds for the fully-authorized amount for a project until the funds are needed by the agency to cover current costs. As a result, a general fund appropriation can be substituted for any unallotted or unspent bond authorization without jeopardizing the project. After all, money is fungible, whether it come from the general fund or bond proceeds.

Another source of possible supplanting would be bond appropriations that had been transferred to agencies, but have not yet been spent. Just three large higher-ed capital projects authorized by the 2020-2022 Appropriation Act have a total of $225.5 million in unallotted bond appropriation, meaning that the funding cannot be spent until the institutions get approval from the Department of General Services and the Department of Planning and Budget to go ahead with the projects. Finally, there is the bond appropriation for the Virginia Port Authority project to deepen and widen the ports of Hampton Roads. At the beginning of this fiscal year, there was $279.3 million of the approved bond appropriation remaining. To date this year, only about $4.5 million has been spent. Using a conservative approach, it is estimated that at least $250 million of that appropriation could be supplanted without affecting the project.

In summary, just a quick survey has identified over $1 billion in capital bond authorization that could be supplanted with general fund appropriation. (There is even more out there that could be identified.) In recent years, it made sense to use bonds for capital projects — general fund revenues were falling at times or only slowly increasing and interest rates were at historic lows. The situation is different now — the Commonwealth is awash in general fund revenue and municipal bond rates are expected to rise. Supplanting these previously  approved bond projects with general fund appropriations would save the Commonwealth’s taxpayers many millions (perhaps hundreds of millions) in general fund appropriations for interest payments over the next 20 years. (General fund debt service payments now are projected to be almost $1 billion in FY 2024.) I am sure the Governor and the Secretary of Finance, both of whom made fortunes in banking and finance, understand that.