A Chaotic Night in Virginia Beach 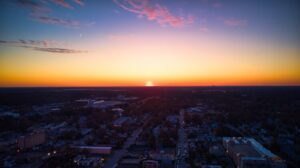 “Don’t drive near the oceanfront,” warned the caller on my cellphone Friday night. “Something’s going on.”

I was on my way home from a dinner near the courthouse and usually travel north on Pacific Avenue.

The other person, who’d left before me, was stuck in traffic. There were sirens and flashing lights. He said a dozen or so guys had just dashed from the west side of Pacific running toward Atlantic – where the action was.

They were wearing ski masks.

Another crazy night on the resort strip, I thought. Looks like the hot weather brought the kids out early.

But this wasn’t just another rowdy night in the roughly 10-block area that locals avoid and city officials pretend is perfectly safe for tourists after dark.

By dawn we knew that 10 people had been shot. Two were dead.

Apparently there were several shooting incidents. Fistfights ended in tragedy when hoodlums pulled out their pieces and began shooting at each other.

The local newspaper was late to the game. Sigh. I was unsurprised that the print edition had no report of the shootings in the morning. After all, the gunfire started around 11:30 p.m. Still, I was shocked to find NOTHING about the melee online early in the morning. Not a word. Not a whisper.

Just checked. Local newspaper has nothing online about 10 shootings at the Virginia Beach oceanfront and a cop injured. It’s Fallujah and they haven’t noticed. #VirginiaBeach

That’s OK, local TV was all over the shootings. So was The Washington Post. Even the Lynchburg News and Advance had a story. Soon every national news outlet – including the local paper – was reporting on the shooting spree in Virginia Beach.

And just like that, my phone began blowing up with texts from friends across the country wondering if I was OK.

I’m fine. Hoodlums on a rampage, I replied.

As soon as it was reported that one of the dead was shot by a police officer, certain news outlets developed amnesia about the other nine shootings and went to work. They reported that the deceased man was unarmed, while posing questions about why the cop who pulled the trigger had not activated his body cam.

Important details, but I’d suggest waiting to get all the facts before grabbing a placard and demanding to defund the Beach police.

Right on cue, the tediously predictable U.S. Sen. Tim Kaine jumped in to use the shootings to call for gun control.

I feel sick at the news of yet another senseless mass shooting—in a community already scarred by the scourge of gun violence. My heart is with Virginia Beach today.

We cannot stand by as more families lose loved ones. The time for Congress to act on gun violence is NOW.

I will hazard a guess that all of the firearms used Friday night were handguns. I’d also be willing to bet none of the shooters had a concealed carry permit.

Oh, and it’s already illegal to brandish a gun or shoot someone with it. Three suspects – ages 22, 20 and 18 – have been arrested and so far they’re charged with seven counts of felonious assault, use of a firearm and reckless use of a firearm.

So, Senator Kaine, tell us: What new federal law would have deterred such violence?

If your real goal is to ban and confiscate all firearms why don’t you just say so? Otherwise, sit this one out. You’re not helping.

This “chaotic” night on the resort strip will be the first real test of Virginia Beach’s new police chief, Paul Neudigate. We’ll have to see how he handles the investigation of one of his men and how he staffs the oceanfront to prevent a recurrence.

At his press conference, Neudigate said an officer from the 2nd Precinct was so close to the first shootings that he watched it and chased down one of the gunmen. The chief said it was alarming that this happened with police officers right there.

Look, you couldn’t pay most of us enough to wade into the hyped-up throng that congregates on Atlantic Avenue on hot nights. Lots of good kids down there for sure, but there’s always an element that’s unruly, armed and itching for a fight.

I’m not ready to blame the police for this mess. It’s going to take bold political leadership to honestly confront the problem and figure out a way to make the resort strip safe, both day and night.

Someone needs to get the volatile situation under control or this summer will be ugly.