The stakes could not have been higher. Ratification by nine states was required for the Constitution to go into effect. When the delegates to the ratifying convention began their deliberations on June 2, they knew that eight states had ratified the Constitution. Being the largest state, the actions of Virginia would likely influence the remaining holdouts: New Hampshire, New York, North Carolina, and Rhode Island. As it turned out, New Hampshire ratified the Constitution four days before Virginia on June 21, thus making it the state that provided the ninth, decisive vote. However, the delegates in Richmond could not have known that. And, without Virginia’s ratification, the new nation would have likely been doomed.

Ratification was not a foregone conclusion.  The delegates debated fiercely for three weeks. The final vote was 89-79 in favor of ratification, but the outcome was uncertain until close to the conclusion of the voting. Leading the opposition Patrick Henry was the redoubtable Patrick Henry. George Mason was also one of the leaders of the opposition. In charge of the forces urging ratification was James Madison, the one person most responsible for the provisions of the new Constitution. Backing him up were Edmund Randolph, Henry Lee, George Nicholas, and John Marshall. 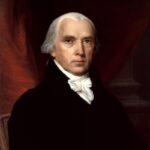 I am aware of the significance of the date because I am reading Ralph Ketcham’s excellent biography of Madison, titled simply, James Madison. I wish that I had read it many years ago.

In the course of my reading, I came across this passage from a speech Madison made to the convention on June 20, 1788. Make of it what you will.

“I go on this great republican principle, that the people will have virtue and intelligence to select men of virtue and wisdom. Is there no virtue among us? If there be not, we are in a wretched situation.”

This entry was posted in Governance, Politics and tagged Dick Hall-Sizemore. Bookmark the permalink.