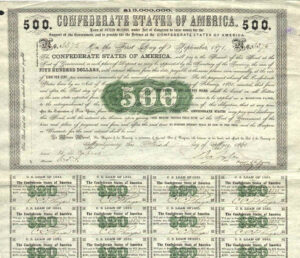 If higher-ed institutions don’t address fundamental challenges, their long-term debt may not be worth much more than these Confederate bearer bonds.

Governor Ralph Northam has unveiled a higher-education refinancing plan that will allow Virginia’s public colleges and universities to reschedule more than $300 million in debt over the next two years.

The Commonwealth of Virginia would refinance bonds issued by the Treasury Board of Virginia and the Virginia College Building Authority. Under the Governor’s plan, which requires General Assembly cooperation, institutions would make no principal payments on their VCBA bonds through fiscal year 2023; the restructuring would extend institutions’ payment plans for two years beyond their current schedule for both types of bonds.

“The COVID-19 pandemic continues to have tremendous impacts on higher education, including the fiscal health of our colleges and universities,” said Governor Northam in a press release. “Families all over the country are taking advantage of record low interest rates to refinance their home mortgages, and we want our public institutions to benefit as well. Refinancing will free up millions of dollars in savings allowing our colleges and universities to make critical investments, meet the needs of Virginia students, and continue offering a world-class education.”

The headline of the Governor’s press release indicated that Virginia institutions would “save” more than $300 million over the next two years. That nomenclature was repeated in leads and/or headlines appearing in the Richmond Times-Dispatch, Roanoke Times, and Washington Post. The initiative will do no such thing. The vast majority of “savings” would come from deferring payments on $300 million, which still will would have to be repaid.

That’s not to say the refinancing isn’t a good idea. Virginia’s public colleges and universities are experiencing a cash flow crunch as uncertainty engendered by the COVID-19 epidemic has cut enrollments. By restructuring their loans, these institutions conserve cash that otherwise gone to meeting their debt payments.

But let’s be clear about what’s happening. Far from “allowing our colleges and universities to make critical investments,” as the Governor suggests, the debt is still on the institutions’ books. To the contrary, extending the debt repayments two more years will constrain the ability of the institutions to borrow more in the future.

Here are the “savings” (press release’s word) broken down by institution:

Bacon’s bottom line: This is a useful stopgap measure to help colleges and universities buy time. The bigger question is what they intend to do with it. Will they maintain the same business model and cost structure in the hopes that COVID-related spending will decline and enrollments will revive when the epidemic eases? Or will they prepare for possibility that things will not go back to normal?

No one knows what will happen, but two forces are converging that do not bode well for the higher-ed status quo. First, millions of college students have been exposed to online classes. While online learning may not be appropriate for elementary school pupils, it can be a cost-efficient substitute for “in person” classes held in lecture halls. Some unknowable percentage of parents footing the bill will conclude that providing their children the four-year “residential experience” is not worth the inflated cost of higher-ed today. Meanwhile, online universities get better and better at what they do, and they are providing a legitimate alternative.

Second, many higher-ed institutions have abandoned any pretense at teaching students how to think in favor of telling them what to think. There is a growing conviction among Republicans and conservatives that many institutions have become indoctrination camps. Why would they make great financial sacrifices so their children can be taught to embrace leftist values and world views?

These challenges are fundamental and long-term. They go to the heart of what ails public higher-ed is today. Deferring $300 million in bond payments won’t change that.